Investment, management and cooperation is key to addressing health issues… 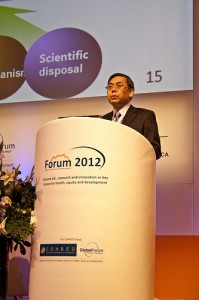 China has been improving health through self-reliance, health science and technology. This is according to China’s vice minister of health, Dr Liu Qian. Qian addressed a plenary session at Forum 2012 entitled “Research and innovation as key drivers for health, equity and development: making it work,” on day 2 (25/4/2012) of Forum 2012.

Qian discussed five areas which China has paid attention to, the first being increased multi-channel investment, with participation by both private and public sectors. The progress in science and technology, due to these investments, has also ensured an increase in government investment.

Secondly, Qian noted that China’s R&D has improved by 20% annually, through increased investment in strategic emerging industries, livelihood and environment protection. In 2010, two mega projects were launched, one, for new drug discovery and development and the other for severe infections.

The third area of importance for China has been to improve the management of research on innovation, said Qian. A competitive selection is encouraged when it comes to basic research, research sharing is promoted, and multi-disciplinary problem solving is used to solve key problems.

According to Qian, China has also actively promoted international cooperation, through collaborative programmes, intergovernmental projects and by hosting and participating in international and regional science mega programmes.

Qian’s final point was that China has strengthened the supervision of intellectual property rights (IPR) and has implemented a number of laws to improve the legal system.

Qian then discussed the successful implementation of these five principles to the Influenza A (h1n1) outbreak that occurred in China in 2009, where a joint collaboration between 38 state departments and headed by the ministry of health, was instrumental in achieving the desired results.

Science and technology innovation fully supported prevention and control according to Qian. Diagnostic reagents, with high sensitivity and specificity were rapidly developed and applied. By isolating patients in the early stage of influenza, outbreak in densely populated areas was prevented.

China’s reaction to the outbreak also included the establishment of large scale databases and treatment – with a guideline on combined treatment by western medication and traditional Chinese methods being developed.

Qian also noted the international impact that China’s response to the outbreak had: China was the first country to massively produce and use the vaccines. The findings of were published in various international scientific journals.

Qian praised the use of science and technology to find an intervention to the influenza pandemic and concluded by encouraging global partnerships when facing health challenges. “We must have a common aspiration, learn from and support each other, jointly address the challenges of global health and make a contribution to people’s health,” said Qian.