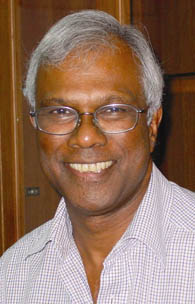 Tan Sri Dr Mani Jegathesan, fondly referred to as the ‘Flying Doctor’ for blazing the tracks around Asia despite being a doctor, was an icon in the 1960s, regarded as the “Golden Era” of Malaysian athletics. In his heyday, he was regarded as the fastest man in Asia, and he is also a renowned doctor and researcher.  He tells us here about his close collaboration with COHRED, and its impact, over the years.

COHRED played a significant role in my career at some point or other. I was working for COHRED in Geneva as medical adviser in 1999 and 2000 and also contributed as organising secretary for the International Conference on Health Research for Development which was subsequently held in Bangkok at the end of 2000. Prior to that, I worked with COHRED from the national perspective in my capacity initially as the director of the Institute for Medical Research in Malaysia and then as the country’s Deputy Director General for Health (research).

When I was working in the Institute for Medical Research in Malaysia – which is the government research arm – at that time, the  concept of Health Systems Research was emerging, and a very strong advocate of that was Dr Yvo Nuyens, who was initially with the World Health Organization (WHO) before joining COHRED. When he came and exposed us within the research community in Malaysia and the Ministry of Health this concept of Health Systems Research, I think it caught on very quickly, and it especially got the attention of the then Director General of Health Services in Malaysia, a gentleman known as Tan Sri Khalid Sahan. He was quite a motivator, and he sort of served as a catalyst to get this system going. So it was a natural evolution when COHRED came on board and then continued to collaborate in this area of Essential National Health Research (ENHR), as well as continuing the agenda for health research systems, which we saw basically as part of a seamless continuum of a national  research agenda. So I witnessed the first steps of the Essential National Health Research systems in Malaysia and COHRED’s support to it. In the Malaysian context, it set the initial tone and the timing I guess was appropriate because it was at that point in time that there were leaders in the Ministry of Health who on their own initiative saw the importance of research and they immediately saw in COHRED a useful partner to take this agenda forward. So I think it was a confluence of events that sort of allowed the synergy to take place. Because basically, you can try to sell a programme, but if the receiving agency or country is convinced and ready to buy in, especially if they come to the conclusion on their own, the chances of it being a successful partnership would be even brighter. And this is what happened in Malaysia because as I said there was at that time a leadership in the Ministry of Health that was ready to adopt this concept.

The emphasis of COHRED’s activities has been “countries first”. The whole issue of capacity building, institutional strengthening and capacity building for health research is something that you have to take to the ground and COHRED has the philosophy and the motivation to work at it. Because it is always much easier to try to preach from the top, but COHRED’s strength is to actually go down to the ground, work with people, integrate with the grass roots movement and try to have a horizontal matrix  with which the importance of everyday research gets internalised.

Since then, I progressed in the Ministry of Health to various career advancements, eventually as the Director of the Institute for Medical Research in which I had the privilege of leading the research programme within the Ministry of Health. We ran it as 5 components: 1) clinical research, 2) public health research, 3) laboratory research, 4) health systems research and 5) management. So at that point in time, we worked quite closely with COHRED with regard to many regional and global initiatives and activities – which became a natural evolution. Then when I retired from the civil service, which at that time was 55 years, I was invited by Dr Yvo Nuyens to spend a little bit of time with COHRED in Geneva and I thought that was a great opportunity. This is how I ended up working in Geneva with COHRED for a couple of years (1999-2000).

At that time, if we look at the research global community there were three groups working in Geneva: there was of course the WHO with its research programme, and then there was the Global Forum for Health Research (GFHR) as well as COHRED. So we were among friends actually and of course it was interesting how each of these three groups had to find their own place within what was a very complicated field. So I was at that time in Geneva when both COHRED and the GFHR were trying their best to be complementary and working towards fostering and encouraging health research as an essential component of the health programmes of all developing countries. Somehow we – each of us – found our niche and managed to work together and of course as time would tell, COHRED and the GFHR merged eventually. I think there is a place for COHRED to continue its work, especially now that it has merged with the Global Forum. I mean, I can see that the annual forum meetings are being driven well and seem to attract the leaders of the research community globally. So I think this extended agenda will undoubtedly be incorporating the aspirations by what used to be two separate organisations, and I believe it will have a bigger impact in producing a holistic approach towards the different aspects of research and its translation into actual health instruments that will make a difference to the health of the people, especially in developing countries.

My role and COHRED’s influence

My role as ‘Medical Adviser’ basically was to bring in the medical and health component towards the activities of COHRED and my main task at that time was to carry COHRED’s message to selective countries in Asia and Africa. In Asia, I worked with Pakistan and Nepal, and then in Africa I worked with Zimbabwe, Tanzania and South Africa to some extent. I used to visit these countries and have discussions with the local counterparts and try to get the message of COHRED across, as well as engage them in conducting regional and local activities as complementary off-shoots to the global programme that COHRED was organising. Furthermore, I became the organising secretary of the first global conference of health research that took place in Bangkok at the end of 2000, but unfortunately a couple of months before that I had to return home for personal and family reasons, but I led the groundwork for that conference which I believe set the tone for the next couple of years.

The COHRED effort in some of these countries would have sowed the seeds of an active integration of health research or of essential health research as we sold it at that time, as part and basis of the health activities within these countries. I have not had the opportunity to really follow up on what happened after all these activities, but I know that even in the early years, there was a lot of activity on the global arena in terms of the presentations, the interactions, the publications, as well as the meetings that came out of these initiatives, which worked towards establishing the importance of health research as part of the national health agenda as well as contributing towards narrowing what we called  the “10/90 gap” between research and the global burden of disease. COHRED contributed much to some of these advancements, and it also has a special place in my heart, so I wish COHRED all the best!